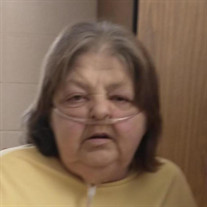 Thada Jane Simmons, daughter of Tony L. and Caroline Sue Sutton Fisher, was born January 4, 1961, in Lebanon, Missouri. She departed this life Friday, April 30, 2021, in Lebanon North Nursing and Rehabilitation Center, in Lebanon, Missouri, at the age of sixty years, three months, and twenty-six days. She was preceded in death by her parents; and a brother, Tony. Thada is survived by a daughter, Jodi Ockerman, of Lebanon, Missouri; a son, Justin Ockerman, of Licking, Missouri; three grandchildren; four brothers, Ronnie Fisher, Roy Fisher, both of Lebanon, Missouri, Richard Miller, and Terry Miller, of Stockton, Illinois; a sister, Suzie Sutton, of Lebanon, Missouri; several nieces and nephews; as well as a host of other relatives and friends. She was born in Lebanon, Missouri, and then lived in Wisconsin, Kansas, and Illinois through the years, before returning to Lebanon. She had worked in customer service, clerical, and at a factory at various times, and then was employed as a waitress for several years. In her spare time she enjoyed fishing, watching television and playing with her grandchildren. Thada was a loving mother, grandmother, sister, aunt, and was a caring friend. We celebrate her life and know that she will be fondly remembered and greatly missed by all those who knew and loved her. All arrangements for Thada Simmons are private under the care and direction of Holman-Howe Funeral Home of Lebanon, Missouri. A Memorial has been established and contributions may be made through the funeral home.

The family of Thada Simmons (Lebanon) created this Life Tributes page to make it easy to share your memories.