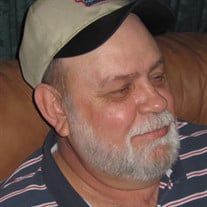 Thomas Allen Bennett was born January 8, 1950, to Foey Webster and Rachel Ilene (Cantrell) Bennett in San Francisco, California. He was raised in Seymour, Missouri, and attended Seymour schools. After high school, Tommy, as he was known to all, started over the road trucking along with many of his friends. “Rooster” drove his truck from coast to coast until he was no longer able to do so. Tommy served in active duty in the United States Army during the Vietnam war and was honorably discharged with recognition for his service. Tommy was married three times. To the union with Veda Blankenship were born his daughters, Tina, Paula, and Rachel. To the union with Sherry Webb was born his son Kenny Wayne. To the union with Tammy Shover were born his sons, Grady and Brady. One of his favorite pastimes was going fishing with his sisters. Later he loved spending time with his grandkids, and meeting his friends at the Seymour cafés. Tommy was known for his generosity and would help anybody in need, even until the last days of his life. He impacted the lives of many young people who looked up to him. His sense of humor touched everybody – you’d never know when you’d get a funny text from him! He had a nickname for everyone he liked, and countless people heard “Don’t tell anybody” after Tommy would stick some cash in their pocket. In addition to his parents, Tommy was preceded in death by a brother Kenny; a son-in-law Shane Aumick; and a granddaughter Abrea Barnes. Tommy leaves behind a large family who will miss him dearly: his brothers, Lester Bennett of Seymour, and Chester Bennet and wife Theresa of Diggins; his sisters, Barbara Pirtle of Conway, and Kathy Cantrell of Seymour; his children, daughter Tina Bruderer and husband David of Switzerland, daughter Paula Barnes and husband Leon of Springfield, Missouri, daughter Rachel Aumick, son Kenny Wayne Bennett and wife Jessica, son Grady Bennett and wife Brittany – all of Seymour, son Brady Bennett and wife Kelly of Mesquite, Texas; his grandchildren, David, Kyle, Abrianna, Aliah, Michael, Nicholas, Olivia, Thomas, Kenadi, River, Weston, Emma, Corbyn, Greycen, Tammula, Grace and Josie; and many more extended family and dear friends. We celebrate Tommy Bennett’s life and all the memories he created. Full military honors will be rendered by the United States Army and the Webster County Veterans Memorial Team.

Thomas Allen Bennett was born January 8, 1950, to Foey Webster and Rachel Ilene (Cantrell) Bennett in San Francisco, California. He was raised in Seymour, Missouri, and attended Seymour schools. After high school, Tommy, as he was known to... View Obituary & Service Information

The family of Thomas A. Bennett (Seymour) created this Life Tributes page to make it easy to share your memories.