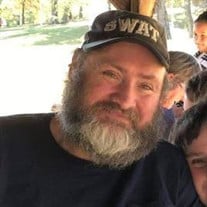 Timothy Allen Rogers, son of Donald and Helen Bennett Rogers, was born May 6, 1971, in Columbia, Missouri. He departed this life Tuesday, September 28, 2021, in his home, near Lebanon, Missouri, at the age of fifty years, four months, and twenty-two days. Tim is survived by his significant other, Michele Gray, of Phillipsburg, Missouri; two daughters, Patricia Rogers, of the State of Georgia, and Kendra Rogers, of Hartville, Missouri; a son, Mark Rogers, of Lebanon, Missouri; twelve grandchildren; his mother, Helen Grimes, and her husband, Darrell, of Lebanon, Missouri; his father, Donald Rogers, of Hartville, Missouri; two brothers, Howard Rogers, and his wife, Marsha, of Weaubleau, Missouri, and Donald W. Rogers, of Phillipsburg, Missouri; two sisters, Ruby Bush, of Hartville, Missouri, and Carolyn Sue Shoemaker, of Magee, Mississippi; several nieces and nephews; his step-children at heart, two step-daughters, Mary Cobert, and her husband, Andrew, of Cabool, Missouri, and Elizabeth McKee, of Phillipsburg, Missouri, two step-sons, Michael Gray and James Gray, both of Cabool, Missouri, a number of step-grandchildren; and as well as a host of other relatives and friends. He was born in Columbia and was raised in Hartville, Missouri, where he attended Hartville Schools and was involved with the Future Farmers of American organization. He lived most of his life in the Manes and Hartville area and then moved to the Phillipsburg area. Through the years, he had worked as a logger, and a mechanic. He enjoyed being outdoors where his favorite activities were fishing and hunting. He liked fast cars and hot rods. He loved his family very much. He was a bit hard headed and strong willed, but was also very caring. Timothy was a loving companion, father, grandson, son, brother, uncle, and was a caring friend. We celebrate his life and know that his family and friends will hold tight to the wonderful memories he made for them during his lifetime. Funeral services for Timothy Rogers will be Tuesday, Oct. 5 at 11 a.m. at Holman-Howe Funeral Home in Lebanon. Visitation will be one hour prior to the service.

Timothy Allen Rogers, son of Donald and Helen Bennett Rogers, was born May 6, 1971, in Columbia, Missouri. He departed this life Tuesday, September 28, 2021, in his home, near Lebanon, Missouri, at the age of fifty years, four months, and twenty-two... View Obituary & Service Information

The family of Timothy Allen Rogers (Lebanon) created this Life Tributes page to make it easy to share your memories.