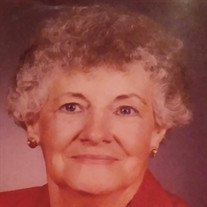 Tommie Dean Dinwiddie, daughter of Tommy Monroe and Della May Savage Dinwiddie, was born October 5, 1932, near Lebanon, Missouri. She departed this life Saturday, March 12, 2022, in Springfield Nursing and Rehabilitation Center, in Springfield, Missouri, at the age of eighty-nine years, five months, and seven days. She was preceded in death by her parents; and a sister, Norma. Tommie is survived by a daughter, Gloria Diane Hawkinson, of Lebanon, Missouri; two grandchildren, Vicky Aller, and her husband, Jake, of Appleton City, Missouri, and Shannon Vaughn, of Lebanon, Missouri; three great-grandchildren, Madalynn, Austin, and Jaxen; a brother, Charles Dinwiddie, of Lebanon, Missouri; several nieces and nephews; as well as a host of other relatives and friends. She lived her entire life in the Lebanon area inside Laclede County. She graduated from Phillipsburg High School. She worked for the H. D. Lee Company for several years and then worked at the Sands Spring Resort Restaurant until retiring. She was also a devoted homemaker to her family. Tommie was a member of Southern Heights Christian Church for a number of years, and later attended Washington Christian Church. She loved gardening and taking care of her yard, and her goldfish pond. She greatly enjoyed spending time with her daughter, grandchildren and great-grandchildren. Tommie was a loving mother, grandmother, great-grandmother, sister, aunt, and was a caring friend. We celebrate her life and know that her family and friends will cherish the wonderful memories she made for them during her lifetime.

The family of Tommie Dean Dinwiddie (Lebanon) created this Life Tributes page to make it easy to share your memories.

Tommie Dean Dinwiddie, daughter of Tommy Monroe and Della May...