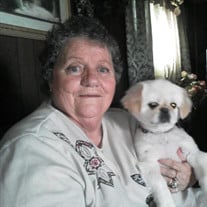 Treva June McNeeley, daughter of Clarence and Louise Masters Peters, was born June 26, 1940, in Kansas City, Kansas. She departed this life Saturday, May 29, 2021, in her home, near Grovespring, Missouri, at the age of eighty years, eleven months, and three days. On February 8, 1964, she was united in marriage to Ronald E. McNeeley, and to this union two daughters and three sons were born. She was preceded in death by her parents; a daughter, Trena Williams; two brothers, Donny Peters and Rickey Peters; and three sisters, Brenda Johnson, Gail Lenhart, and Pam Rhoads. Treva is survived by her husband of fifty-seven years, Ronald, of the home; a daughter, Barbara Tanner, and her husband, Ken, of North Port, Florida; three sons, Floyd McNeeley, of Grovespring, Missouri, Lonnie McNeeley, and his wife, Angie, of Lebanon, Missouri, and David McNeeley, and his wife, Pam, of Grovespring, Missouri; twelve grandchildren; ten great-grandchildren; two brothers, Ronald Peters, of Maryville, Missouri, and Terry Peters, of Kansas City, Missouri; four sisters, Delores Wisdom, of the State of Kansas, Beverly Appleby, of Kansas City, Missouri, Judy Burns, of Camdenton, Missouri, and Roxanna Calihan-Smith, of Newton, Kansas; a number of nieces and nephews; as well as a host of other relatives and friends. She was born and raised in Kansas and then moved to Northwest Missouri for several years after she and Ronald were married. Then in 1972, the family moved to Lebanon, Missouri and made their home. Treva was always a devoted homemaker to her husband and family and also worked as a custodian at the Laclede County Court House for twenty years. Treva had made her profession of faith in Christ and had attended Mount Zion (Cuba) Freewill Baptist Church through the years. In her spare time she enjoyed fishing and being on her lawn mower. She particularly liked Spring and Fall seasons every year. She had a delightful sense of humor and never met a stranger. She also loved taking care of others. Her family was very dear to her and she especially enjoyed time with her grandchildren and great-grandchildren. Treva was a loving wife, mother, grandmother, great-grandmother, sister, aunt, and was a caring friend. We celebrate her life and know that her family and friends will cherish the wonderful memories she created for them during her lifetime. All services for Treva McNeeley will be private under the care and direction of the Holman-Howe Funeral Home of Lebanon, Missouri.

Treva June McNeeley, daughter of Clarence and Louise Masters Peters, was born June 26, 1940, in Kansas City, Kansas. She departed this life Saturday, May 29, 2021, in her home, near Grovespring, Missouri, at the age of eighty years, eleven... View Obituary & Service Information

The family of Treva J. McNeeley (Lebanon) created this Life Tributes page to make it easy to share your memories.