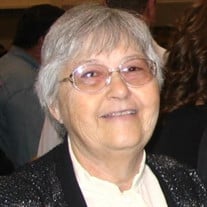 Vera Lea Rifenburg, daughter of Virgil and Willie Green Officer, was born January 22, 1942, near Morgan, Missouri. She departed this life Wednesday, September 29, 2021, in Mercy Hospital, in Springfield, Missouri, at the age of seventy-nine years, eight months, and seven days. On October 18, 1963, she was united in marriage to Ernest W. Rifenburg, and to this union one daughter and one son were born. She was preceded in death by her parents; and a brother, Dale Officer. Vera is survived by her loving husband of fifty-seven years, Ernest, of the home; a daughter, Denise Johnson, and her husband, Bill, of Stockton, Missouri; a son, Kevin Rifenburg, and his wife, Alisa, of Lebanon, Missouri; five grandchildren, Dereck Johnson, and his husband, Nate, Summer Waheed, and her husband, Ryan, Heather Steinmark, and her husband, Steven, Shawna Fletcher, and Sara Rifenburg; seven great-grandchildren; a sister-in-law, Mary Officer, of Springfield, Missouri; a nephew, Greg Officer, of Springfield, Missouri; as well as a host of other relatives and friends. She was raised in the Morgan community, and graduated from Conway High School. After she and Ernest were married, they made their home near Conway and lovingly raised their children. In addition to being a devoted homemaker to her husband and family, Vera also worked at the Assembly of God headquarters in Springfield for several years. Vera had made her profession of faith in Christ and was a member of Morgan Baptist Church. In her spare time she enjoyed going on day trips with her husband, and liked collecting elephants. Vera also greatly enjoyed growing flowers in her garden. Her family was very dear to her and she especially enjoyed having time with her grandchildren and great-grandchildren. Vera was a loving wife, mother, grandmother, great-grandmother, sister, aunt, and was a caring friend. We celebrate her life and know that her family and friends will cherish the wonderful memories she created for them during her lifetime. Funeral services for Vera Lea Rifenburg will be Saturday, Oct. 2 at 2 p.m. at Holman-Howe Funeral Home in Lebanon. Visitation will begin one hour prior to service time. Burial will be in Roper Cemetery. A memorial to Roper Cemetery and St. Jude Children's Research Hospital has been established and memorials may be left at the funeral home.

The family of Vera Lea Rifenburg (Lebanon) created this Life Tributes page to make it easy to share your memories.