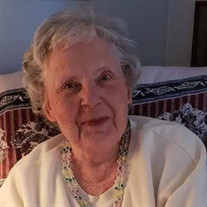 Versa Ruth (Busick) (McComb) Waters Lomenick, daughter of James Everett and Ada Florence (Hawkins Busick, was born September 17, 1932, and was actually named Phyllis. A week after Phyllis’ birth, her mother, Ada, passed away and her father was devastated at the loss, and having a new baby and her young siblings to provide and care for. They were living by Maggie McMillen and she and her mom were owners of Lebanon Greenhouse. They told Birtley Floyd and Louella (Jolley) McComb, who were unable to have children of their own, and they took the tiny baby home to adopt, love and adore. They named her Versa Ruth and they kept her in contact with her dad, Everett, and her siblings. She left for her Heavenly home on Monday, August 9, 2021, in her home, in Lebanon, Missouri, at the age of eighty-eight years, ten months, and twenty-three days. Versa played clarinet in the Lebanon Marching Band and graduated from Lebanon High School in the Class of 1950. She met Donald Waters and they were married shortly after she graduated. They had seven children, Gary, Teresa, Charla, Lary, Zoe, Sharon and Donna. Versa went to the First United Methodist Church in Lebanon with her parents and gave her heart to Jesus at a young age. She lived a Christian life and took her children to church anytime the doors were opened. She worked at pretty much every ministry of the church over the years. She wanted to share her love for her Savior. She loved to cook and try new recipes and was a devoted homemaker, always keeping a clean house. She was an excellent cook and was known for her meatloaf as well as other dishes, and wanted to feed everyone. She would always make too much food and shared it with neighbors, friends and family. Life wasn’t easy for her but she had the sweetest smile and genuinely cared for others. She stretched what she had for her family. Don and her divorced and it knocked her down, but she didn’t stay down. She cleaned houses and worked in the kitchen at schools and at Christian Healthcare South. In 1988, she married Curtis Lomenick and he was good to her and went to church with her. He unfortunately passed on November 17, 1990. She sold her house and moved to Harwood Manor and cooked and made friends with the other tenants. Versa Ruth was quiet and kept her friends all her life. She was a prayer warrior and her children had no idea to the hours she prayer on her knees for her family. She wanted to see all of them in Heaven someday. She always said, “When you have children, they don’t come with instructions. None of us on earth are perfect. We do the best we can, and you’re going to make mistakes, but keep your eyes on Jesus.” When her health started declining, she moved in with her daughter and son-in-law, Zoe and Victor Adkins in March of 2016. Victor didn’t hesitate to agree to move her in with them, and he loved and cared for her harder than anyone. She and Don stayed friends and always loved each other. Don passed away in September of 2003. Dementia robbed her of her memories but she still enjoyed family dinners and time spent with her grandbabies and great-grandbabies and she always lit up around them. She was preceded in death by her parents; her adopted parents, and Everett’s second wife, Elizabeth Lola Busick; two daughters, Sharon Kay (Waters) Rose, and Teresa “Tee” Waters; two great-grandsons, Malachi Burdette and Konner Uva; and her siblings, Jim Busick, and his wife, Arlene, Margaret Lochman, and her husband, LaRue, Lora Smith, and her husband, Warren, and Kathryn Hyde, and her husband, A.C. Versa Ruth leaves to carry on her memory, three sons, Gary Waters, and Michael Solano, both of Chicago, Illinois, and Lary Waters, of Bettendorf, Iowa; three daughters, Charla Hoover, and her husband, Donald, of Live Oak, Florida, Donna Combs, and Zoe Adkins, and her husband, Victor, all of Lebanon, Missouri; her grandchildren, Brandon Adkins, Ricole Waack, Michael Rose, and his wife, Shay, Misty Jones, and her husband, Larry, Christopher Adkins, and his wife, Kahre, Andrew Waters, Leasa Marie Yelton, Andrea Adkins, David Rose, and his wife, Janelle, Shenna Burdette, and her husband, Damon, Nichole King, and her husband, Leslie and Amber Sigler, and her husband, Francisco; her great-grandchildren, Caydon Griesbaum, and Leeam Waack, who had a strong bond with Versa, as they spent time with her daily and called her “Maw”, Colt Adkins, Liz Judy, Autumn Jones, Karlie Jones, Khloe Uva, Olivia Grace Lobaton, Nolan Waters, Taten Adkins, Ian, Calen, Peyton Burdette, Ivan and Jada Schloendorn, Trevor and Carter King, and Anabella Sigler; a host of nieces and nephews and great-niece and great-nephews, that she adored; her church family, brothers and sisters in Christ; and many dear friends. Versa hadn’t been able to attend church for years, but she held strong to God’s promises and turned to Him ALWAYS! She lived by the saying, Trust in the Lord with all your heart. The value of a wonderful mother cannot be measured, only treasured. Versa Ruth is getting her reward in Heaven. But she has left a huge hole in the hearts of her family. Her prayers through the years and her love will stay with her family FOREVER! Funeral services for Versa Lomenick will be Saturday, Aug. 14 at 11 a.m. at Holman-Howe Funeral Home in Lebanon. Visitation will be Saturday from 10 a.m. - 11 a.m. in the funeral home. Burial will be Hufft Cemetery in Eldridge. A memorial has been established to Claws and Paws or the Pregnancy Support Center and donations may be left at the funeral home.

The family of Versa Ruth Lomenick (Lebanon) created this Life Tributes page to make it easy to share your memories.