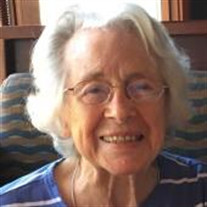 Virginia Mae Qualey, daughter of Arthur and Frances McGuire LaDuque was born on August 24, 1924 in Rochester, New York. She departed this life on July 11, 2021, in Windsor Estates Care Center, Camdenton, Missouri at the age of ninety-six years, ten months and seventeen days. She was united in marriage to Arthur Kirvan on April 23, 1948 and to this union two children were born. She was preceded in death by her parents; her first husband and children’s father, Arthur Kirvan; her second husband, Frank Qualey; one daughter, Gail Lysiak; two sisters, Mary Jean Fuller and Jean Schultz. She is survived by her son, Glen Kirvan and wife Cyndee of Osage Beach, Missouri; three granddaughters, Stephanie & Nikki Callahan of St. Louis, Missouri, Beth & Scott DeWolf of Skaneateles, New York, Kristin Finucane & Jeff of Rochester, New York; one grandson, Adam Lysiak & Carolyn of Hamburg, New York; five great-grandchildren; a sister-in-law, Mary Kirvan of Moravia, New York; a brother-in-law, Lloyd Fuller of Rochester, New York; as well as a host of other relatives and many friends. Virginia was raised in Rochester, New York and was a graduate of West High School. Shortly after graduation, she married Arthur Kirvan and raised a family in their home they had built themselves. On their three-acre lot there were many raspberry and blackberry bushes that she used to make homemade pies for her family to enjoy. Virginia was devoted homemaker as well as a lens inspector in eye care until retirement. On weekends and after retirement, her and Arthur enjoyed camping trips in their travel trailer and had been to every state in the lower forty-eight states and had collected spoons from each destination. In her spare time that they weren’t camping and taking extended summer vacations, Virginia was an avid bowler and loved to do so up into her late 80’s. If not bowling she enjoyed having a get together with friends and having her friends over for card night. She was a loving and a caring wife, mother, neighbor and friend. We celebrate her life and her accomplishments and will treasure the memories she created for her family and friends. Graveside services will be held at the Churchville Cemetery, in Churchville, New York and will be announced at a later date. Arrangements are under the direction of Allee-Holman-Howe Funeral Home and are incomplete at this time. To send flowers to the family or plant a tree in memory of Virginia Mae Qualey please visit our Tribute Store.

The family of Virginia Mae Qualey (Camdenton) created this Life Tributes page to make it easy to share your memories.