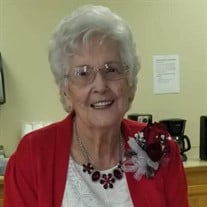 Viva Jean Ray, daughter of Charles Millard and Della M. McGuire Childers, was born May 28, 1929, in Kellyville, Oklahoma. She departed this life Wednesday, January 12, 2022, at James River Nursing and Rehabilitation in Springfield, Missouri, at the age of ninety-two years, seven months and fifteen days. On February 21, 1948, she married Cecil Darrell Ray, and to this union three daughters and one son were born. Viva was preceded in death by her parents; her husband; her son, Ken Ray; her grandson, Kevin; her son-in-law, Raymond Weaver; her brothers, Buel, Hays, Euin, Herb, and John Childers; her sisters, Syble Young, Alma Haapala, Florene Teer, and Dorothy Moore. Viva is survived by her three daughters, Jeanie Weaver, of Lebanon, Missouri, Pat Heafley, and her husband, Van Allen, of Lebanon, Missouri, and Sharon Stone, and her husband, Joe, of Lebanon, Missouri; eighteen grandchildren, Kimberly, Teressie, Doyle, Alice, Kendra, Robert, Terri, Regina, Bill, Ginger, Joseph, Bobby, Garrett, Katie, Sab, Kenny, Skyler, Heaven; a number of great-grandchildren; a number of great-great-grandchildren; as well as a host of other relatives and friends. She moved to Eldridge, Missouri with her family when she was young. After her marriage to Cecil, she lived in California, Arkansas, and Missouri, living most of her later years in Lebanon, Missouri. She worked as a homemaker and as a babysitter. Viva was, in fact, a very highly sought after babysitter. Viva followed the Baptist faith. She enjoyed bluegrass music, crocheting, and cross stitch. She liked spending time at the Hughes Center. She was always fun loving and ready for a party. Viva’s family was her core and very important to her. Viva was a loving wife, mother, grandmother, great-grandmother, great-great-grandmother, daughter, sister, aunt and was a caring friend. We celebrate her life and know that her family and friends will hold tight to the wonderful memories she made for them during her lifetime. A memorial has been established and contributions may be made through the funeral home.

The family of Viva J. Ray (Lebanon) created this Life Tributes page to make it easy to share your memories.