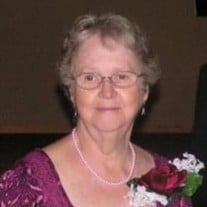 Wanda Mae Corn, daughter of Thomas J. and Mabel E. Davis Ross, was born September 10, 1942, in Lebanon, Missouri. She departed this life Monday, August 9, 2021, in her home, near Lebanon, Missouri, at the age of seventy-eight years, ten months, and thirty days. On April 14, 1995, she was united in marriage to Clarence Laverne Corn, who passed away on May 20, 2016. She was also preceded in death by her parents; a sister, Maxine Pendergrass; as well as her two brothers, Tommy Ross and Jack Ross. Wanda is survived by two daughters, Heather Perry, and Lora Rogers, and her husband, Scott, all of Lebanon, Missouri; a son, Doyle Darrow, and his significant other, Diane, of Niangua, Missouri; two step-daughters, Christina Corn, and Mechelle Doeden, both of Lebanon, Missouri; a step-son, Michael Corn, of Lebanon, Missouri; seven grandchildren, Brandy, Lacey, Shelby, Cody, Calley, Hayley, and Waylon; a number of great-grandchildren; several nieces and nephews; her special caregiver, Brenda Staggs, which the family wishes to thank very much; as well as a host of other relatives and friends. She was born and raised in the Lebanon area and received her education there. She worked as a seamstress for the H. D. Lee Company for many years, and was also a devoted homemaker to her family. After she and Laverne were married, they made their home near Lebanon. Wanda made her profession of faith in Christ at the age of ten and was baptized by her father. She was a longtime member of Trinity Full Gospel Church near Eldridge, Missouri. She was well known for her crafts and stuffed animals, and displayed and sold her items at many area craft fairs and shows. She enjoyed going to auctions and liked buying and selling items. She centered her life around her family and her faith. She loved her family dearly and especially enjoyed having time with her grandchildren and great-grandchildren. She also loved animals and particularly her devoted dog, “Lily”. Wanda was a loving mother, grandmother, great-grandmother, aunt, and was a caring neighbor and friend. We celebrate her life and know that her family and friends will cherish the wonderful memories she created for them during her lifetime. Funeral services for Wanda Corn will be Friday, Aug. 13, 2021 at 10 a.m. in Holman-Howe Funeral Home in Lebanon with Kenny Jo Moore officiating. Visitation will Thursday, Aug. 12 from 6- 7:30 p.m. Burial will be in Washington Cemetery. A memorial has been established to the American Cancer Society.

The family of Wanda M. Corn (Lebanon) created this Life Tributes page to make it easy to share your memories.