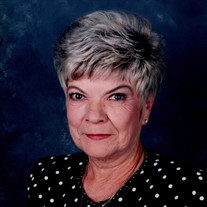 Wanda Louise Eady, daughter of Oran and Goldie Roberts Hemphill, was born June 28, 1938, in Falcon, Missouri. She departed this life Friday, July 2, 2021, in her home, in Fair Grove, Missouri, at the age of eighty-three years, and four days. Early in her life, she was united in marriage to James Elmer Ivey, and to this union one daughter and two sons were born. Mr. Ivey preceded her in death. On September 14, 1979, she married Walter Richard Eady, who passed away on September 18, 1995. She was also preceded in death by her parents; four brothers, Dale, Don, Harold, and Darius Hemphill; three sisters, Bonnie Hemphill, Bernice Dickens, and her husband, Glenn, and Juanita “Jiggs” Uder, and her husband, Howard. Louise is survived by a daughter, Vicky Lynn Null, and her husband, David, of Lebanon, Missouri; two sons, James Keith Ivey, of Lebanon, Missouri, and Kevin Ray Ivey, and his wife, Paulette, of Fair Grove, Missouri; nine grandchildren, Trish Watterson, and her husband, Shannon, Chris Null, and his wife, Casey, Bethany Sooter, Meagan Ivey, Grace Crain, Hannah Ivey, Luke Ivey, and his wife, Bobbi, Kaleb Ivey, and Tyler James Ivey; ten great-grandchildren, Payton, Judd, Halle, Avery, Hudson, Isabelle, Jackson, Ada, Paisley, and Quinn; a sister, Evelyn McCormick, of Lebanon, Missouri; a sister-in-law, Alberta Hemphill, of Lebanon, Missouri; a number of nieces and nephews; as well as a host of other relatives and friends. She was raised in the Falcon and Lebanon communities and attended Lebanon R-III Schools. She was always a devoted homemaker to her husband and family. She earned her cosmetology license from Lebanon Beauty School and worked as a beautician until 1969. She then began a career with Walmart and was a sales associate for several years before becoming an assistant manager. She retired in the 1990’s, and for the last few years had made her home in Fair Grove, Missouri. Louise attended Lifepoint Church in Lebanon for several years and Brighton Assembly of God Church for the last six years. She was an immaculate housekeeper and liked taking good care of her home. Her family was very dear to her and she especially enjoyed spending time with her grandchildren and great-grandchildren. Louise was a loving mother, grandmother, great-grandmother, sister, aunt, and was a caring friend. We celebrate her life and know that her family and friends will cherish the wonderful memories she created for them during her lifetime. A memorial to New Home Cemetery has been established and contributions may be made through the funeral home.

Wanda Louise Eady, daughter of Oran and Goldie Roberts Hemphill, was born June 28, 1938, in Falcon, Missouri. She departed this life Friday, July 2, 2021, in her home, in Fair Grove, Missouri, at the age of eighty-three years, and four days. Early... View Obituary & Service Information

The family of Wanda “Louise” Eady (Lebanon) created this Life Tributes page to make it easy to share your memories.