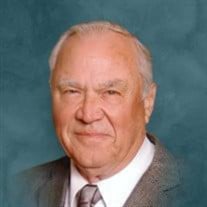 Weldon Wayne Hegle, long-time Bolivar businessman, died the early morning of St. Valentine’s Day, February 14, 2022, at Citizens Memorial Healthcare Facility. He was 91. Weldon was born on a farm outside of Lost Springs, KS. Aug. 29, 1930, as the third child of William and Edith Hegle. He completed grade school and high school at Lost Springs and a year and a half of college at LeMars, Iowa. Weldon met the girl of his dreams, Nola Wendt, in Herington, KS on Feb. 3, 1950. He often said he knew at first sight that she was the one for him. They married on the following New Year’s Eve and they never parted until her death in 2018. Three children were born to that union, Steven Wayne, Gary Lynn and Deborah Jean. Weldon and Nola stayed on the farm four years and then moved first to Lawrence, KS, then to Kansas City and Marshall before finally settling in Bolivar in 1962, where Weldon became the manager of the Russell Newport’s Ben Franklin Store. They bought that business in 1974, renamed it Hegle’s Variety, and added the Bolivar Department Store. They operated both stores for about five years. They then started Hegle’s Woodworks. They traveled the United States together setting up shows and selling souvenirs to retailers and theme parks. They sold to businesses in all 50 states and as many as 12 other countries. Individuals and businesses throughout this area crafted many of the novelty items they bought and then sold. They retired in 2012 after 50 years of business in Bolivar. Weldon served as president of the Bolivar Area Chamber of Commerce for two years and was instrumental in keeping Teters’ Floral Products in Bolivar. He led fundraising that prevented its relocation to Springfield. He also was instrumental among those who worked to get Bolivar Nursing Home built, which is now Citizens Memorial Healthcare Facility, his residence for his last four years and three months. He was a long-time member of Open Hearts United Methodist Church of Bolivar, where he sang in the choir and was chairman of the finance committee and the board of trustees. He also was a Mason, a Shriner and president of the Sixth Man Club at Southwest Baptist University for seven years. His favorite pastime was fishing. He went with buddies on 44 fishing excursions to Canada and he won several tournaments. He competed in the Missouri and U.S. Open fishing tournaments. During one outing on Lake Stockton in April 1980, he and two buddies saved the lives of another fishing party, which included three young girls. A boat capsized during a storm that had ruined what began as a beautiful day. After he and his buddies had arrived safely back to shore, they were told about the capsized boat. They went back out to perform the rescue despite lightning, hail, high wind and high waves. Thirty years later, during one of his morning coffee gatherings at Brenda’s Café, where for many years he carefully chronicled results of “the coffee game” which determined who paid for the coffee and tip each day, Weldon noted the anniversary of that rescue. He then wondered out loud about whatever had become of those girls. Work immediately began toward finding them and organizing a reunion that took place at his house, which then led to follow up visits. Besides his parents, Weldon was preceded in death by his son, Steven; wife, Nola; brother, Paul; sisters Iola Schroeder of Topeka, KS and Arlene Straub of Lenexa, KS, and grandson Brandon. Survivors include his son and daughter-in-law Gary and Neva Hegle of Bolivar; daughter Deborah Vaughn of Joplin; six grandchildren; and six great-grandchildren. Visitation will be held 10:00 AM to 11:00 AM Monday, February 21, 2022 at Butler Funeral Home Chapel in Bolivar Services will be at 11:00 AM at the Butler Funeral Home Chapel in Bolivar. Burial is in Greenwood Cemetery, Bolivar. Memorial donations are recommended to Open Hearts United Methodist Church of Bolivar, Southwest Baptist University’s women’s and/or men’s basketball programs, or a charity of the donor’s choice. To send flowers or a memorial gift to the family of Weldon Wayne Hegle please visit our Sympathy Store.

The family of Weldon Wayne Hegle (Bolivar) created this Life Tributes page to make it easy to share your memories.