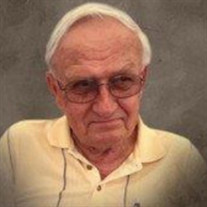 Wilburn Ray Ball, 85 of Bolivar, Missouri passed away Sunday, April 25th at his home after a short illness. Wilburn was born in Dunnegan, Missouri on August 13, 1935 to Verner and Orba Ball. Wilburn was a member of the Highway 13 Church of Christ. Wilburn worked for Owens Corning Fiberglass in Kansas City, Missouri. City of Bolivar for the Special Road District, MoDot, and Ball Trucking. His most memorable job was owning and operating the Bolivar Bowl and the Bowl-a-rama restaurant. He was city Alderman for the city of Bolivar. He was the owner of 4B’s properties. He also helped with Ball Fireworks where he supervised making sure the fireworks were placed correctly. He enjoyed traveling with his wife of almost 66 years on May 4th, 2021. Wilburn made many friends along the way. He enjoyed going to the horse races and casinos with his sons. He also enjoyed breakfast at Brenda’s every morning with his friends. Wilburn was also known to “stop” working wherever he was at 3:00 p.m. sharp to have coffee with his longtime friend James Houk. He liked family gatherings and spending time with his grandchildren and great-grandchildren. Wilburn was preceded in death by his parents Verner and Orba Ball, sisters Laverna Ashlock, Marjorie Fullerton, twin sister Wilma Stark, Janice Ball, sister in law Louetta Ball, Sharon Coffey, Pat Steely, Elizabeth Coffey, Brother in law Allen Sullivan, Herman Coffey, Jim Coffey, John Brown and nephew Todd Coffey. Wilburn leaves behind his wife, Winnie Lee Ball of 65 years; two sons, Rick Ball and friend Sherry Basinger, Jeff Ball and wife Laurie; grandson, Bryan Overall and wife Joni, granddaughter, Cacey Ball, grandson Brandon Ball and wife Colleen, four great-grandchildren, Jayden and Kaden Overall, Colter and Haven Ball. He is also survived by his brother Robert Ball of Bolivar; brother-in-law Richard Coffey, Danny and Beverly Coffey, Kenny and Sharon Coffey, Paul and Ruth Coffey, Frank Steely; sister-in-law Teresa and Al Cornell, Connie Brown, Lois Coffey, Donna and Wink Ahart, and Judy Carmen, along with a host of nieces and nephews and many friends. A huge thank you to everyone who has come to visit, spend time with Wilburn and countless phone calls to check on him. Most of all the caretakers that were with Wilburn, Dorothy Peck, Debbie Vessey, Laura Strokamp, Kim Ingersoll, Rosaine Martin, Tammy Lippencott. You were all so kind to him and for that we thank you. Funeral services for Wilburn will be at 11:00 AM Thursday, April 29, 2021 at Butler Funeral Home in Bolivar, with a visitation from 10:00 AM to 11:00 AM. Burial will take place following the service at Enon Cemetery. Memorial contributions can be made to Shriners Hospitals for Children or the Polk County Humane Society. To send flowers or a memorial gift to the family of Wilburn Ball please visit our Sympathy Store.

Wilburn Ray Ball, 85 of Bolivar, Missouri passed away Sunday, April 25th at his home after a short illness. Wilburn was born in Dunnegan, Missouri on August 13, 1935 to Verner and Orba Ball. Wilburn was a member of the Highway 13 Church of... View Obituary & Service Information

The family of Wilburn "Wilbur" Ball (Bolivar) created this Life Tributes page to make it easy to share your memories.