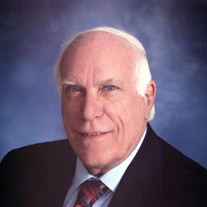 William “Bill” E. Clemons, son of Neal and Helen Sara Grafe Clemons, was born February 2, 1934, in Springfield, Missouri. He departed this life Monday, June 13, 2022, in Cox South Hospital in Springfield, Missouri, at the age of eighty-eight years, four months, and eleven days. On August 10, 1957, he was united in marriage to Peggy Hammer, and to this union a son was born. His parents preceded him in death. “Bill Ed”, as he was called in high school, is survived by his loving wife of sixty-four years, Peggy, of the home in Branson West, Missouri; a son, Mark Clemons, and his wife Kim, of Blaine, Washington; two granddaughters, Olivia Clemons and Tara Clemons; as well as a host of other relatives and friends. He was raised in Lebanon, Missouri, and graduated from Lebanon High School in the Class of 1951. He began studying at Southwest Missouri State University, but left to serve his country faithfully in the United States Army for two years. As he was leaving the military, he happened to meet Peggy, and it took him several tries to get up the nerve to ask her out. He returned to SMS and continued his education until earning his degree. After he and Peggy were married, they made their home in Kansas City where Bill worked for Folgers, later moving to Cincinnati Ohio, where Bill worked for Procter and Gamble until retiring in 1994. He and Peggy then retired to Missouri. Bill had followed the Presbyterian faith throughout his life. He served on the board of directors of Springfield Symphony and the Springfield Opera Guild. He enjoyed playing golf, football, and tennis. He liked baseball, especially following the St. Louis Cardinals. He also was an amateur architect. He loved his family dearly and greatly enjoyed having time with his granddaughters. Bill was a loving husband, father, grandfather, and was a caring friend. We celebrate his life and know that his family and friends will hold tight to the wonderful memories he made for them during his lifetime. A memorial has been established to the American Cancer Society and donations may be made through the funeral home.

The family of William E. "Bill Ed" Clemons (Lebanon) created this Life Tributes page to make it easy to share your memories.