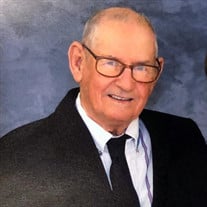 William “Bill” Barton Nutter, Sr., son of James Barton and Mary Mae Pressley Nutter, was born November 24, 1930, near Lebanon, Missouri. He departed this life Wednesday, July 28, 2021, in Lebanon South Nursing and Rehabilitation Center, in Lebanon, Missouri, at the age of ninety years, eight months, and four days. On September 3, 1949, he was united in marriage to Wilma Deloris Shelton, and to this union one daughter and two sons were born. He was preceded in death by his parents; his wife, Wilma, on June 9, 2019; a daughter, Sharon Coffman; four brothers, Thomas, Jerry, Jack, and Larry Don Nutter; and two sisters, Bonnie Hill, and Doris Sherrer. Bill is survived by two sons, Bill Nutter, Jr., and his wife, Barbara, and Randy Nutter, and his wife, Barbara, all of Lebanon, Missouri; a son-in-law, Wayne Coffman, of Lebanon, Missouri; nine grandchildren; fourteen great-grandchildren; one great-great-grandchild; several nieces and nephews; as well as a host of other relatives and friends. He was born and raised in the Lebanon, Missouri area, and lived most of his life here. After he and Wilma were married, they made their home in Florida for thirteen years while Bill worked as a superintendent at the Lake Wales, Florida Wastewater Plant. After returning to Lebanon, Bill and Wilma continued to lovingly raise their family. Bill worked for the Lebanon Wastewater Plant for a number of years and also raised cattle, and did appliance repair. Bill had made his profession of faith in God and had served as a pastor through the years. In his spare time he enjoyed fishing and playing cards. His family was very important to him and he especially enjoyed having time with his grandchildren. Bill was a loving father, grandfather, great-grandfather, great-great-grandfather, uncle, and was a caring friend. We celebrate his life and know that his family and friends will treasure the wonderful memories he made for them during his lifetime. Funeral services for Bill Nutter will be Saturday, July 31 at 2 p.m. at Holman-Howe Funeral Home in Lebanon. Visitation will be one hour prior to the service. Burial will be in Mount Rose Memorial Park. A memorial has been established to Shepherd's Chapel Gospel Ministry and may be left at the funeral home.

The family of William "Bill" Nutter, Sr. (Lebanon) created this Life Tributes page to make it easy to share your memories.