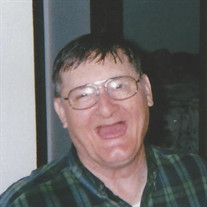 William Marion "Billy" Tanner, son of William A. Tanner and Novella Carr Tanner was born January 6, 1947 in Walnut Ridge, Arkansas and departed this life on Wednesday, August 18, 2021 in Rocky Ridge Manor, near Mansfield, Missouri at the age of seventy-four years, seven months, and twelve days. He was preceded in death by his parents, brother, Junior Tanner, and three uncles, W.M. Carr and wife, Katherine, Bennie Carr and James Alden Carr. Billy is survived by two aunts, Mary Carr and Genell Cook; cousins, John Carr, Larry Carr, Annette Carr Ramsey, Pennie Carr Ireland, Glenn Carr, Cathy Carr Turner, Ridge Carr, Karen Carr Looney, and Sara Carr Harper and many friends who loved him. Billy was born in Walnut Ridge and moved with his family to Strafford, Missouri and then Everton, Missouri. Around 1965 the family moved to Mansfield where he lived the rest of his life. Billy’s dad died first, then Junior, and then his mother, Novella, who died in 2007. He had always lived with his family and now it was time for a new home for Billy. He moved from the family home in “suburban” Mansfield to “downtown” Mansfield where he lived in senior housing. HE LOVED IT! He experienced things he had never done before. Things that most people take for granted like, parades, auctions, sitting on the city square, walking around town with his dog visiting with business owners and people on the street to name a few. He also developed an appetite that got him a ride on a helicopter. He thought he was having a heart attack, but it turns out after he got to the hospital he admitted he had eaten several boxed pies from Town and Country for lunch and it made him feel like he was having a heart attack (that happened more than once but it didn’t involve a helicopter every time). Billy loved the holidays, especially Halloween and Christmas. He would dress up on Halloween and walk around town in his clown costume all day long and had his Santa hat on during the Christmas season, as well as decorating his apartment. He loved coloring and would share his colored pictures with many people around town. His love of animals was lifelong, having several “puppies” that he cared for. In August of 2018, Billy had a debilitating stroke and could no longer live at home, requiring 24 hour care. He lived at Rocky Ridge Manor for the rest of his life with great care and compassion from everyone at Rocky Ridge. THEY LOVED HIM! William “Billy” Tanner was a loving son, brother, nephew, cousin, and a very special person who touched the lives of many people. He lived a life with limited abililites, but he was kind, courteous, and was always thankful to those who helped him. You could not help but love him. Billy will truly be missed. Funeral services will be at 10:00 a.m. Thursday, August 26, 2021 in Holman-Howe Funeral Home, Mansfield with burial to follow in the Mansfield Cemetery.

William Marion "Billy" Tanner, son of William A. Tanner and Novella Carr Tanner was born January 6, 1947 in Walnut Ridge, Arkansas and departed this life on Wednesday, August 18, 2021 in Rocky Ridge Manor, near Mansfield, Missouri at the... View Obituary & Service Information

The family of William "Billy" Tanner (Mansfield) created this Life Tributes page to make it easy to share your memories.