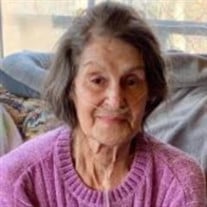 Yolanda Rapier, daughter of Walter Lehnherr and Maria Weisendonger Lehnherr was born, March 27, 1946 in Schwanden, Switzerland. She departed this life, May 12, 2021, at her home in Linn Creek, Missouri at the age of seventy-five years, one month and fifteen days. She was preceded in death by her parents, and a brother, Walter Lehnherr. She is survived by her daughter, Vanessa Rapier of Tiffin, Iowa; a son, David and Chastity Rapier of Camdenton, Missouri; two granddaughters, Alexa and Abigail Rapier both of Camdenton, Missouri; an “adopted” son, Jonathan and Amy Webster of Camdenton, Missouri; as well as a host of other relatives and many friends. Yolanda was raised in Switzerland where she received her basic schooling and a degree from an accounting school. She moved to Geneva where she practiced accounting for a period of time. She then ventured to Australia for two years as an Indentured Servant. Yolanda met her children’s father who at the time was an active soldier in the United States Army serving in the Vietnam War. With her engagement Visa she boarded a freight ship and made a long twenty-six-day trip to the United States. As a wife and mother Yolanda spent over twenty years in several states, mostly in the Midwest as an Army wife and mother before permanently making the Lake of the Ozarks her home in 1982. Yolanda went to work for Tan-Tar-A Resort in Osage Beach, Missouri where she was a waitress for over thirty years. She did anything and everything possible to provide for her children’s wants and needs throughout her life. Of all her years near or far and the things she had done, Yolanda will be best known as a loving and dedicated mother. Yolanda was a Protestant by faith and was an avid supporter of the ASPCA. In her spare time, you would find Yolanda gardening, doing some coloring or working on a puzzle book. Her love for all animals was second to none. It wasn’t uncommon for her to bring the runt of a litter in her home to care for, from a piglet to a small calf, it didn’t matter. She was a loving and a caring neighbor and friend. We celebrate her life and her accomplishments and will treasure the memories she created for her family and friends. A Visitation Service will be held Friday, May 21, 2021 from 5:00 PM to 7:00 PM in the funeral home. Arrangements are under the direction of Allee-Holman-Howe Funeral Home. To send flowers to the family or plant a tree in memory of Yolanda Rapier please visit our Tribute Store.

Yolanda Rapier, daughter of Walter Lehnherr and Maria Weisendonger Lehnherr was born, March 27, 1946 in Schwanden, Switzerland. She departed this life, May 12, 2021, at her home in Linn Creek, Missouri at the age of seventy-five years, one month... View Obituary & Service Information

The family of Yolanda L. Rapier (Camdenton) created this Life Tributes page to make it easy to share your memories.