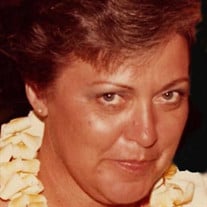 Yvonna M. Harwood peacefully departed this life surrounded by loved ones on Thursday afternoon, August 19, 2021, at Glenwood Health Care in Seymour, Missouri, at the age of 86 years of natural causes. Yvonna was born in Diggins, Missouri, on May 10, 1935, and was preceded in death by her parents Reverend Eli and Dorothy Cook, brother Ernest Cook, sisters, Helen Poyner and Juanita Dickson; and her second husband Edward Harwood. She is survived by her children, daughter Karla Henry and husband Steve of Cabot Arkansas, son Curtis White of Seymour, daughter Pamela Baumgardner and her husband Allen of Springfield, Missouri, and daughter Monica Baker and her husband Jeffrey of Greenwood, Missouri. Also surviving is her sister Elaine Helms, brother Gene Cook and his wife Belenda, and brother-in-law Jack Dickson – all of Seymour; seven grandchildren and several great grandchildren. Yvonna was raised in Diggins and graduated from Seymour High School in 1952. On November 29, 1952, at the age of 17, she married Elmer White. As an Air Force wife, she traveled around the world; their children were born in Goose Bay, Labrador, Texas, Pisa, Italy, and Mississippi, respectfully. She also lived in England for several years prior to moving to Texas where Elmer retired. In 1970, she moved to Kimberling City with her four children and owned and operated Indian Hills Trading Post down at the Joe Bald Camp area. Over the period of the next 30 years, she also owned and operated several beauty salons and was a bartender for many years at the Pub & Grub and the Elk’s Lodge where she met her second husband Edward. A few years later she purchased and worked full time at Norge Village Laundry & Dry Cleaners located in the Kimberling City shopping center where she was affectionately known as the ‘Dog Lady’, as she bred and raised her beloved Shih Tzu dogs. In 2001, she closed Norge Village and moved back to Seymour where she resided until her passing.

Yvonna M. Harwood peacefully departed this life surrounded by loved ones on Thursday afternoon, August 19, 2021, at Glenwood Health Care in Seymour, Missouri, at the age of 86 years of natural causes. Yvonna was born in Diggins, Missouri, on... View Obituary & Service Information

The family of Yvonna M. (Cook) Harwood (Seymour) created this Life Tributes page to make it easy to share your memories.