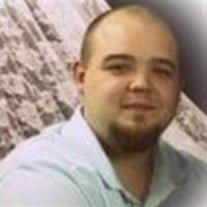 Zachary Zayne Stone was born January 3, 1992 in Bolivar, Missouri. His name was chosen by his beloved (maternal) Grandma Joyce. Zachary was born a fighter as he came into this world with many health obstacles that threatened his chance at life. Once he overcome those obstacles, he was a baby who was always smiling and putting a smile on faces of everyone around him. He was born a winner, as he was declared the 1992 First Baby of the Year, a contest sponsored by the Polk County Newspaper. As a child, he enjoyed playing Cops and Robbers, building treehouses, BMXing, watching WWE, and playing competitive sports. Following into his teen years, he discovered his passion for creating music, writing in his journals, and ordering Chinese takeout. Zachary continued to pursue his passion for music as an adult. He would record himself rapping to express himself and then, upload the songs onto the internet in hopes of one day becoming a rap star. Zachary was so determined to become a rap star that he even picked up the hobby of graphic design in order to create album covers for the music he had created. Besides his music, he enjoyed fishing, cooking, drawing, studying the Bible, and going to the Raiders game in Kansas City every year with his brother, Kanyon. Zachary touched the lives of many during his 30 years of life. He knew many people and had visited several places including living in Missouri, Texas, Wyoming and traveling to California. His family would describe him as someone who could make you smile because of his child like laugh and sense of humor. The relationships he had with his family and friends was something he always held close to his heart. Zachary unexpectedly departed his life May 31, 2022 in Pulaski County, Missouri, at the age of thirty years, four months, and twenty-eight days. He was preceded in death by his maternal great grandparents, James Jesse Fisher and Virginia Konitz Phillips (Fisher); maternal grandparents, Betty Joyce Fisher Banks and Joe Albert Abney; and uncle, Randall Abney. Zachary is survived by one daughter; his mother, Dayna Blanar; ste-fathers, Daniel Blanar and Jim Wix; brother, Kanyon Stone and wife Stelea; sisters, Megan Wix and Zariah Blanar; niece, Kaleah Stone; aunts, Brigitte Maddux and husband John, Misty Mikus and husband Jason, Shirley Law and husband Terry; his father, Buddy Bradley and wife Alicia; step-mother, Julie Arnold; brother, Jaret Bradley and wife Ashley; sister, Amelia Bradley; nephew, Ryker Bradley; grandparents, Ronnie and Susie Bradley “Poppy and Grams”; aunt, Susan Dibben and husband Dennis. Zachary was also survived by a host of other relatives and friends. Zachary was a loving father, son, brother, uncle, grandson, nephew and friend to everyone. His life will continue to be celebrated and his family and friends will forever cherish the memories that they created during the span of Zachary’s life. Zachary will be laid to rest in the Memorial Gardens of Memories, Buffalo, Missouri, next to his maternal grandmother Betty Joyce (Fisher) Banks. Services for Zachary Stone will be Monday evening at 6 p.m.at Cantlon Otterness & Viets in Buffalo. Visitation will be held one hour prior to the service. To send flowers or a memorial gift to the family of Zachary Zayne Stone please visit our Sympathy Store.

Zachary Zayne Stone was born January 3, 1992 in Bolivar, Missouri. His name was chosen by his beloved (maternal) Grandma Joyce. Zachary was born a fighter as he came into this world with many health obstacles that threatened his chance at life.... View Obituary & Service Information

The family of Zachary Zayne Stone (Buffalo) created this Life Tributes page to make it easy to share your memories.