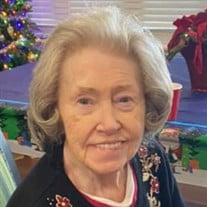 Zeta Mae Johnson, daughter of Joseph Harold and Bessie Mae Hester, was born October 22, 1930, in Conway, Missouri. She entered into God’s eternal care on Wednesday June 9, 2021, in Mercy Hospital, in Lebanon, Missouri, at the age of ninety years, seven months, and eighteen days. On May 17, 1949, she was united in marriage to Farrel Dwayne Johnson by Roger Tribble, and to this union one daughter was born. Zeta and Farrel were married seventy years. She was preceded in death by her husband; parents; four brothers, Richard, Henry, Jack and Melvin Hester; and a sister, Mary Lois Hester. Zeta is survived by a daughter, Sherry Smith, and husband David, of Santa Ana, California; a sister-in-law, Vicky Ward, of Kingston, Tennessee; several nieces and nephews including, Christy Hester Blair, Sandy Hester Mullins, Randy Hester and wife Ronda, Tonja Hester Reynolds and husband Rich, Larry Hester and wife Suzanne, Arlis Hester and wife Charity, and William Henry Hester, Jr.; cousins, Rhonda Langston, Andy Decker, and Mary and Jim Officer; as well as a host of other relatives and many friends. She was raised in the Conway, Phillipsburg, and Springfield areas and graduated from Phillipsburg High School in the Class of 1949. She began a romantic relationship with the love of her life when Farrel shared his ice cream cone with her. After she and Farrel were married, they made their home on their dairy farm in Lebanon for several years, and lovingly raised their daughter. In 1956, Zeta, Farrel and their daughter Sherry, made their home in the Compton and Lynwood area of California. In addition to being a devoted homemaker to her husband and family, Zeta also worked as the State Daycare Center Director in Compton, California for twenty years helping many abused and poor children. In 1991, after Zeta and Farrel retired, they moved to Marshfield, Missouri, and then on to Lebanon in 2001. Zeta had made her profession of faith in Christ and was actively involved in churches through the years. She was a member of the Phillipsburg Christian Church for over thirty years, and was active in many church functions. She had received the Honorary Life Award for helping underprivileged children. In her spare time she enjoyed being outdoors where she particularly liked camping and fishing. She also enjoyed playing cards with family and friends. She had a spunky way about her and was also a little sassy at times. She loved her family dearly. Zeta was a loving mother, sister, aunt, cousin, and was a caring friend. We celebrate her life and accomplishments and know that her family and friends will cherish the wonderful memories she created for them during her ninety years. Funeral services will be Tuesday, June 15 at 10:30 a.m. at Holman-Howe Funeral Home. Visitation will be held Monday evening, June 14, from 6- 7:30 p.m. in the funeral home. Burial will be in Mount Rose Memorial Park.

The family of Zeta M. Johnson (Lebanon) created this Life Tributes page to make it easy to share your memories.